Where Olives are Crushed

The night Jesus was arrested he went with his disciples to a quiet place to pray. He had just celebrated Passover with his closest disciples and he had also washed their feet. This was an act of humbling service and care for them. His betrayer Judas slipped out into the darkness to complete the evil found in his heart. 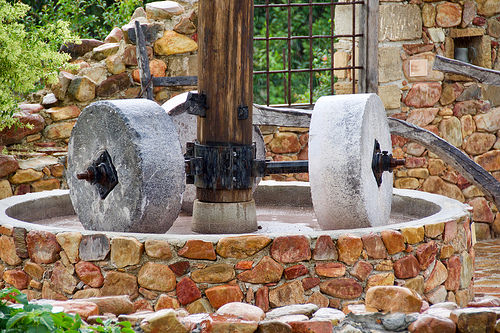 Jesus had a habit of regularly finding secluded places to pray. His ministry was demanding and he needed those times to be refreshed by his father. This night he took his disciples to the Garden of Gethsemane.  Apparently this was a regular spot for them. It was away from the crowds and they would have found shelter among the olive trees.

. As I prepared my sermon I was captivated by the meaning of Gethsemane. It means, oil press. The garden is located at the foot of the Mount of Olives and this is where the olives would be pressed or crushed to make olive oil.

It is a mystery to our human minds that Jesus was fully God yet walked this earth fully as a man. He experienced life as though he was fully human.

Adopt the same attitude as that of Christ Jesus, who, existing in the form of God, did not consider equality with God as something to be exploited. Instead he emptied himself by assuming the form of a servant, taking on the likeness of humanity. And when he had come as a man, he humbled himself by becoming obedient to the point of death— even to death on a cross. – Philippians 2:5-8 (CSB)

Jesus knew that his arrest was imminent and that within a few hours he would be beaten and nailed to a cross. Beyond the physical, he would feel the crushing wait of the sin of the world and the wrath of a just God who must punish sin. All this he would do on our behalf, so we could return to a full and righteous relationship with God our father.

Here in the garden, like the olives, Jesus was being crushed by the thoughts of what laid ahead. Luke 22:39-44

describes Jesus as sweating drops of blood. He longed for the companionship of his closest friends who would soon flee in the darkness. Often as we go through the struggles of life we long for our friends to watch with us. The long day and the cool of the garden was too much for them. Instead of praying they would fall asleep. This was a journey Jesus would have to face alone. He prayed for the cup of wrath to pass him, but Jesus willingly submitted to the will of the Father.

He was despised and rejected by men, a man of suffering who knew what sickness was. He was like someone people turned away from; he was despised, and we didn’t value him. Yet he himself bore our sicknesses, and he carried our pains; but we in turn regarded him stricken, struck down by God, and afflicted. But he was pierced because of our rebellion, crushed because of our iniquities; punishment for our peace was on him, and we are healed by his wounds. We all went astray like sheep; we all have turned to our own way; and the Lord has punished him for the iniquity of us all. – Isaiah 53:3-6 (CSB)

At the time of this posting we are just two weeks from Easter, a time to remember and celebrate the resurrection of Jesus. Over the next couple of weeks take time to remember without the death of Jesus on the cross there would be no resurrection. When we come to Jesus we are called to die to ourselves so like Jesus we might be resurrected to a new life. Reflect on the work of Jesus on the cross.

Jesus died on that cross so we might live a new life.


Pastors Patrick and Yolanda serve as our Executive... (more)


Nick and Laura oversee our Tech team and assist with church... (more)